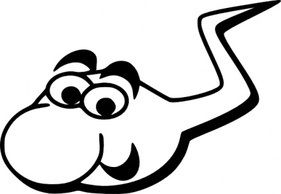 This information was provided by a wonderful long time Labrador Retriever Breeder and I could not agree more!!

You know the natural environment for canine semen is to be in a nice warm dog body and then to be put into another nice warm dog body and begin a journey. We, now because of some wonderful scientist and repro specialist or able to collect this semen and suspend it with special fluid and a cool temperature. However it is not in the sperm's job description to be flung around, spun around, get warm, get cold, get warm, get cold, bounced around some more, pushed through a straw.

So I have to ask, why in heavens name when people received these delicate creatures, do they take them out of the suspended cool environment they are in and spin them in a centrifuge, then warm them up which immediately gets them swimming and expending energy, let them sit out in a tube while waiting to look at a few of them under a microscope and then sometimes warm them even more, and then push them threw a pipette into the girl in heat. When these collections are received they should be handled as the delicate creatures they are. You keep that collection in the box if at all possible so as to cause as little fast fluctuation in temp as possible.

If you feel the need to look at the semen, you very slowly and gently rotate the tube back and forth a couple of times then take out a drop and immediately put the tube back into its box and close it. Then you put that drop out to warm or use a slide warmer and look at it which sometimes takes ten minutes or more. Then if it looks good , take the tube out of the nice cool box and put it in the girl. DO NOT WARM IT FIRST, DO NOT SPIN IT, DO NOT ADD MORE EXTENDER, JUST PUT IT IN THE BITCH AND LET HER BODY WARM IT SLOWLY TO THE EXACT TEMPERATURE IT NEEDS TO BE. THAT WAY THE SPERM ARE ALREADY ON THEIR WAY TO THEIR DESTINATION BEFORE THEY START SWIMMING AND EXPENDING ENERGY. THEY ARE NOT SWIMMING IN CIRCLES IN A TEST TUBE!

I know with the old extenders you had to do all sorts of stuff and if you still use one of those, and it needs washes and all that stuff then fine do it. But if the stud dog owner is using one of the newer extenders, just put it in slowly into your girl, followed by a few cc's of air from your syringe. I would also say if you look at the semen and you think it is all dead but the semen was not frozen in the tube when you got it, the ice packs are still cold so nothing got overly warm, then just put it in your girl.

I cannot tell you how many times bitch owners have called me and said all the sperm was dead but the box was completely in tact, nice and cool and no evidence of frozen liquid in the tube. I tell them to put it in and they do and they end up with a nice big litter of puppies. And I would venture to guess if you have done many breedings you have had this experience on your end where you thought the semen was dead but miraculously your bitch did get pregnant.It amazes me that whenever a bitch does not get pregnant, everyone points fingers to the stud dog and yet, that is the easiest part of the breeding to evaluate. You got the semen, you or your vet looked at it and said, 'Oh its great" and then the bitch does not get pregnant and immediately the vet and the client ask, is he making puppies???? Well gee whiz, you saw his product and said it was good. What more must the poor guy do??

So we've already looked at the stud dog's part and also at how the stud owner shipped the semen because it was evaluated upon arrival. So how about how it was handled after that- what kind of abuse did it suffer before entering the place of its destination? Did you wash your hands before you did the deed. Well perhaps you shouldn't have. Did you know a microscopic amount of water will kill sperm???? Not a drop- a microscopic amount.

So I don't know but it would seem to me that everyone would know the less you jostle, handle, whirl, and 'now you're warm, now you're not,' that sperm the better off it would be in its strange unnatural environment. And why make it so hard on yourself and the sperm. Just gently pull it up into a syringe that has no rubber parts and is sterile and then gently push it through a pipette that is sterile and not made of latex and you are done and the sperm each have little smiley faces on them as they race forward to Utopia!